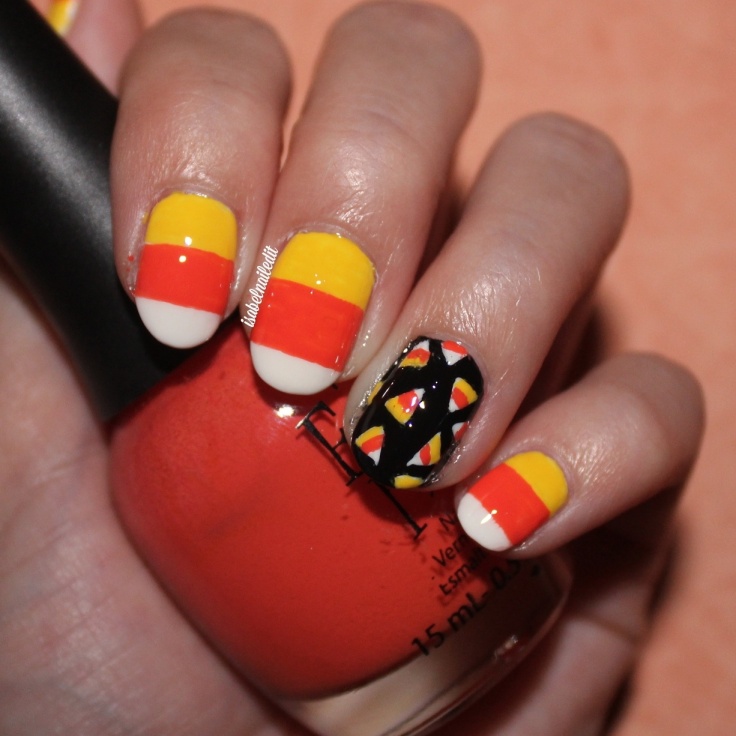 Start off with a base coat, I used Revlon’s “Quick Dry Base Coat.” 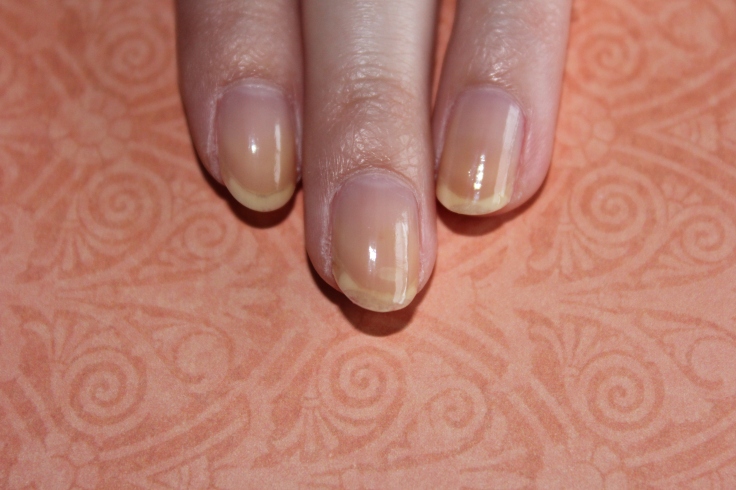 Paint an accent nail with black polis (I chose the ring finger) and the rest of the nails with white polish, I used Sally Hansen’s “White Out” and “Black Out.”

On the nails painted with white polish we will paint the candy corn stripes, you want the white at the tip of the nail and smaller than the other colors, the orange should be in the middle and the largest section (only slightly larger than the yellow) and the yellow will be towards the cuticle. Begin by painting a thick yellow stripe towards the cuticle of the nail with a striper brush and filled in with a detail brush. I used Maybelline’s “Fierce N Tangy”, Winstonia’s “Short” striper brush and “Fine Line” brush.

Paint a thick orange stripe in the middle of the nail using the same tools and an orange polish or acrylic paint. I used Finger Paints’ “Tangerine Tint.” On the nail with black polish we will create a candy corn pattern. With a white polish and thin detail brush, paint small triangles all over the nail, be sure to paint some going off of the nail to get the patterned effect. I used Winstonia’s “Berry Wine” brush and the same white polish from before. 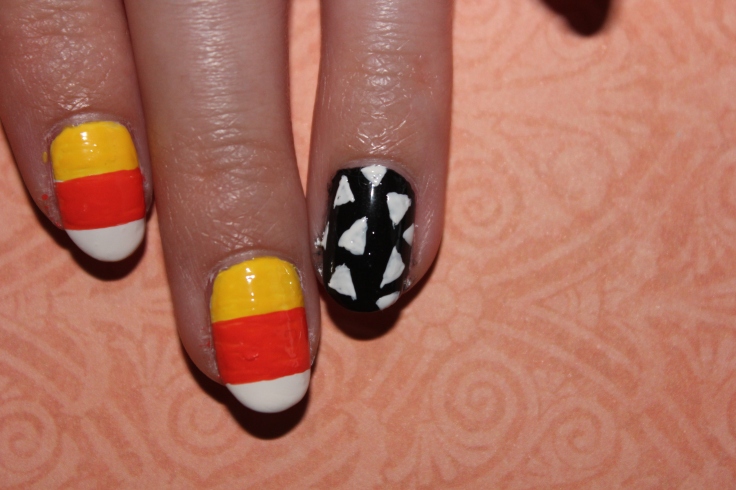 Using the same thin brush, paint a stripe of yellow at the base of the triangle and orange in the middle, leaving white at the tip. 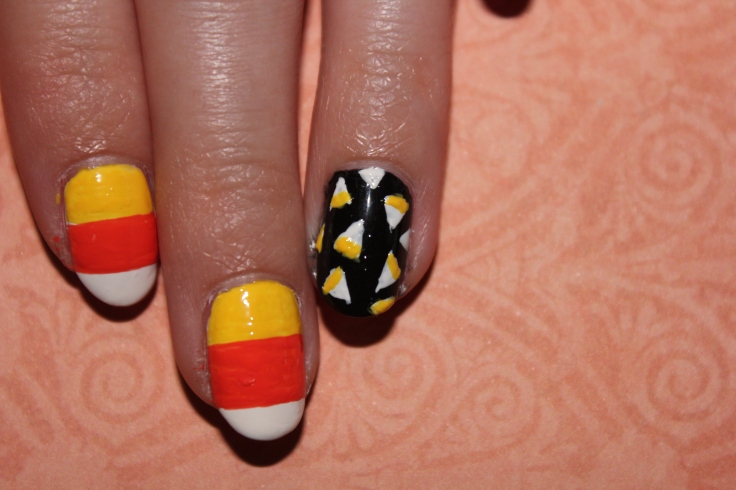 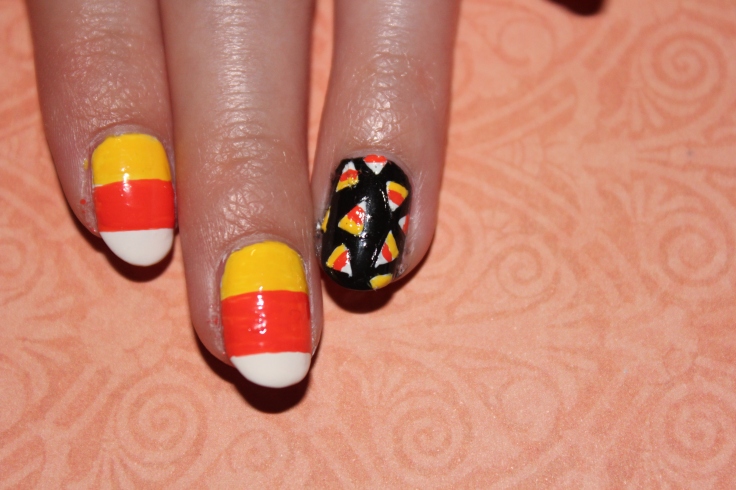 You can fix up the lines of the triangles with the black polish and detail brush. Lastly, apply a top coat, I used Revlon’s “Extra Life No Chip Top Coat.”

Your Candy Corn Nails are finished!

Start off with a base coat, I used Revlon’s “Quick Dry Base Coat.”

Apply a nude/flesh toned/white color as the base color, I used NYX’s “Bare My Soul.” You can really use any colors for this nail art to create different types of nail art, it doesn’t even need to be halloween themed. 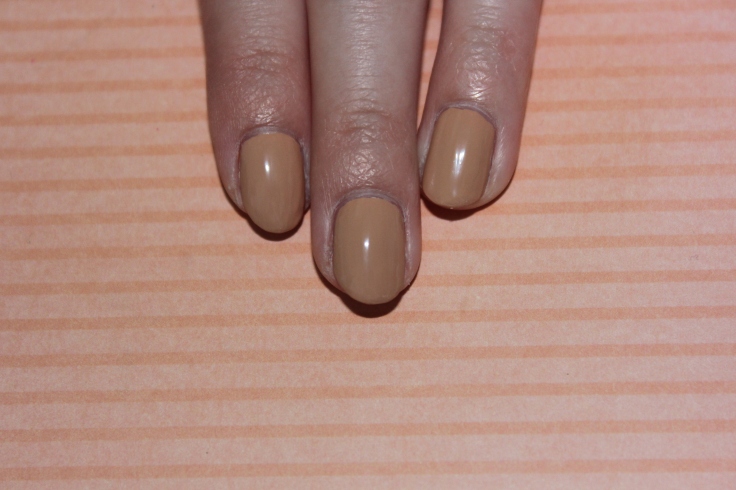 With a blood red color (or another color of your choice) place a few large dots closer to the cuticle of the nail than the tip. I used a large dotting tool and Express’s “Naughty.”

With a medium dotting tool, drag some polish from the top of the dots to the tip of the nail. 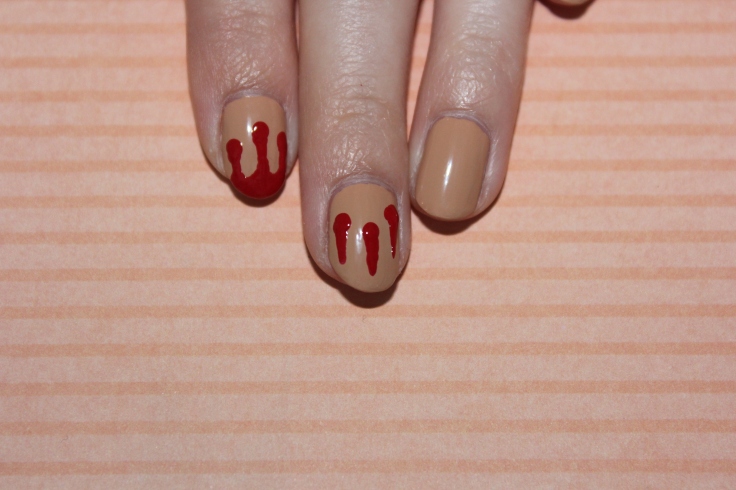 Connect the tips of those lines with a curved line and a small dotting tool and fill in the rest of the tip area. 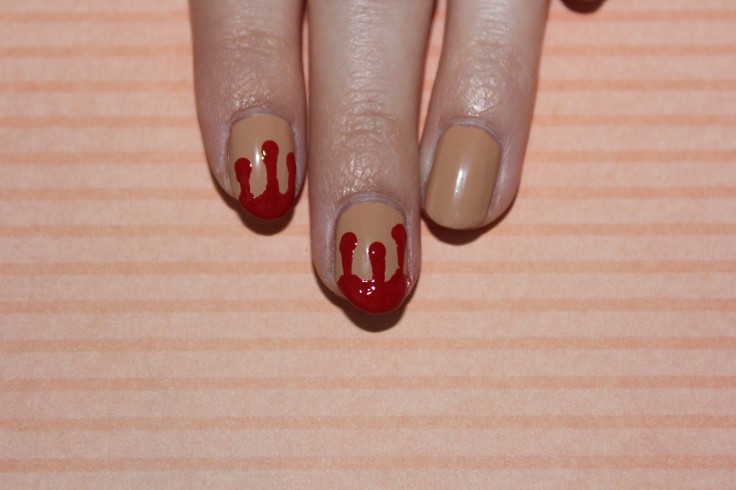 Fix any imperfections with the same small dotting tool.